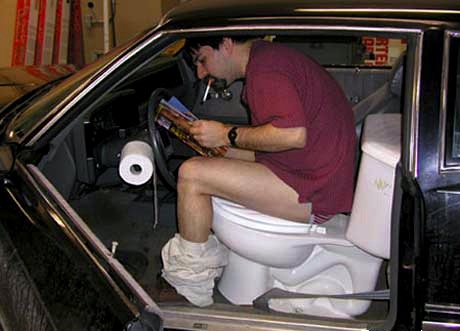 According to the UK’s Mirror:

A public loo is home to 80 bacteria for every square inch and a half. But 700 harmful bugs live in the same area on a steering wheel, gear stick and back seat.

Scientists said the car boot was the filthiest area, with 1,000 bacteria for every one and half square inches. The study found that bacillus cereus – a bug that can cause food poisoning and is found in rice, pasta, potatoes and pies – was the most common along with arthrobacter, which is found in soil and human skin.

According to the survey, 42% of drivers admitted to regularly eating and drinking in their cars.

But only one in three cleaned the inside of their motor once a year, while one in 10 said they never vacuumed or wiped down the interior. Dr Ron Cutler, director of biomedical science at Queen Mary University, London, said: “While most of the bacteria were unlikely to cause health problems, some cars were found to play host to a number of potentially harmful bacterial species.

Gross, but not surprising. After all, anyone who has worked in the field of auto trim for any length of time can attest to how filthy some customers’ cars are. Personally, fur and the smell of wet dog are what gross me out the most. But I’ve heard horror stories involving blood and feces.

We want to hear from you: Tells us about the most disgusting car you’ve ever worked on. Go ahead – complain. We don’t mind a bit.

Mike and Jim Ring of Ringbrothers are skilled … END_OF_DOCUMENT_TOKEN_TO_BE_REPLACED

Installing convertible soft tops is one of … END_OF_DOCUMENT_TOKEN_TO_BE_REPLACED

Ever wonder why some auto upholstery shops … END_OF_DOCUMENT_TOKEN_TO_BE_REPLACED

Big news for Volkswagen fans! As per your … END_OF_DOCUMENT_TOKEN_TO_BE_REPLACED

Last month there was a lot of talk within our … END_OF_DOCUMENT_TOKEN_TO_BE_REPLACED