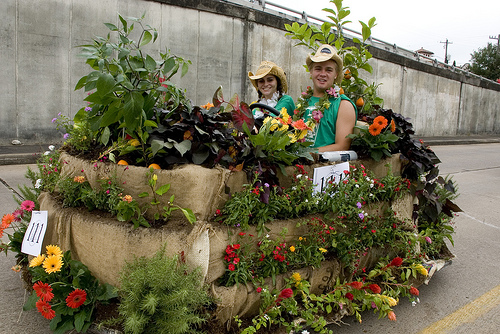 With a Toyota Prius on almost every street in America, the presence of green cars is no longer unique. In fact, just about every major automaker is dabbling in hybrid technology, electric powertrains or some form of alternative fuel.

What many folks don’t realize, however, is that there are more ways to make cars Earth friendly than to tweak their sources of power – especially on the inside. Today, Fast Company published an interesting piece titled “In The Future, Your Car Will Be More Plant Than Machine” – in which the author highlights Ford’s recent push to trim its automobiles in plant-based fabrics.

According to the author, Ariel Schwartz, Ford is experimenting with plant-based fabrics because it recognizes that oil – which is used to create plastics and vinyls – is a limited and expensive resource.

Angela Harris, Ford’s lead research engineer, explains to Fast Company: “In theory, anytime you can grow something as opposed to paying for it to be shipped, the better the economic cost.  … Oil prices are extremely volatile. Suppliers may be able to lock in lower costs of plant-based products as those sources would be more stable in cost–ideally it would be a win-win from a business and an environmental standpoint.”

So what types of plant-based innovations is Ford experimenting with?

This week, Ford–the auto industry’s plant cheerleader–announced that it is researching the use of dandelion root in parts of its cars’ interiors. That’s just one biological element you might start seeing in Ford’s cars. […]

The dandelions will be used as a rubber replacement in the car company’s cupholders, interior trim, and floor mats. The key to the research is a species of Russian dandelion,Taraxacum kok-saghyz, that contains a milky-white substance which could could be an ideal replacement for synthetic rubber. […]

Ford has also replaced petroleum-based foam with soy foam in many of its vehicles. The feature has helped the company reduce its annual petroleum oil usage by over 3 million pounds.

The company is also experimenting with wheat straw–a byproduct of growing and processing whea–, that is typically thrown away–as a plastic reinforcement in the storage bins of the Ford Flex. The odorless wheat straw plastic has demonstrated better integrity than non-reinforced plastic,and it weighs up to 10% less than talc or glass-reinforced plastic. [more]

Innovative? Indeed. However, Ford isn’t the only company experimenting with greener interiors. The all-electric Nissan Leaf, for example, is trimmed in recycled water bottles. And other companies, like Rinspeed, are relying on bamboo and other wood fibers to make their vehicles more Earth friendly.

If these trends catch on, auto upholstery professionals may soon find themselves ordering rolls of dandelion fabric instead of vinyl. Smart shops are already getting in on the action by offering their customers the option of soy-based foams (available at Rochford Supply and other wholesale retailers). While these materials are expensive compared to their petroleum-based counterparts, environmentally-conscious customers are usually willing to spend more to live green.

You know how to work a sewing machine, but do … END_OF_DOCUMENT_TOKEN_TO_BE_REPLACED

Check out this awesome guide on how to … END_OF_DOCUMENT_TOKEN_TO_BE_REPLACED

In 2011, Chevrolet introduced the convertible … END_OF_DOCUMENT_TOKEN_TO_BE_REPLACED

The business card has stood the test of time … END_OF_DOCUMENT_TOKEN_TO_BE_REPLACED

In the craft of auto upholstery, where … END_OF_DOCUMENT_TOKEN_TO_BE_REPLACED