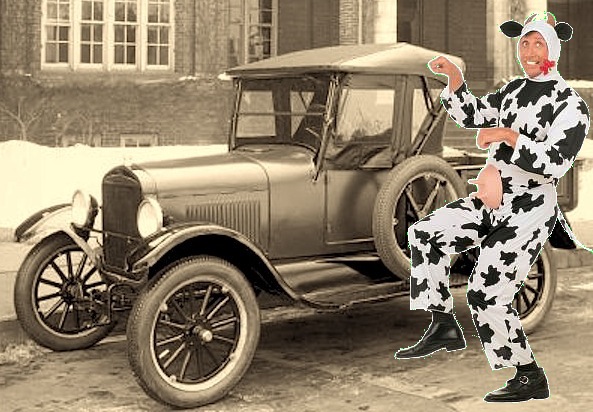 Ted Stillwell of The Leavenworth Times, a local newspaper in Kansas, recently glanced through a periodical that was published in 1933 to learn about life during the Great Depression. Among the many articles he read, one was about a fella who, to save money, made his own convertible top for a Ford Model-T… out of cowhide.

The story was about a strange looking car passing through Excelsior, which caused quite a stir and many turned to stare in wonderment. It was an old Model-T Ford looking somewhere between an animal and machine. The chugging of the engine even gave something of an animal sound to the strange hair-covered contraption. It seemed that Walter P. Miller of Bates City,  Missouri, who was passing through town, needed a new roof for his car, but he was lacking in cash to pay for it. He had several hides back on his farm and when he took them to market in Excelsior he was disappointed that they would not bring enough money for a new top.

The Model-T did not have a hard top; it was open to the elements with a convertible top, probably made of canvas. Why won’t the hides make a car covering, he wondered, so he took his car and the hides back to his farm and in Robinson Crusoe fashion, he needled together four hides.

The front of the convertible top had a black calf hide, with the hairs turned outward; toward the center was a tan cowhide, with the suede showing. Then, on the rear was a sheepskin and pig hide, each bearing the fur in the usual manner. “Why not,” asked Miller? “It is rain proof. I never heard of a cow carrying an umbrella. It will turn hail and will last longer than this whole car is going to last. It isn’t anything of beauty, but then neither is the car. There is shelter from the sun, the rain, and what ever else might come from above.”

Miller admitted, “During the warmer days the odor from the hides was not exactly like a bunch of sweet smelling violets, but the car usually went fast enough to keep the lack of fragrance at low ebb.” [more]

I guess it’s true what they say, “Necessity is the mother of invention.”

Real men sew. We've always known that. But it … END_OF_DOCUMENT_TOKEN_TO_BE_REPLACED

Last month there was a lot of talk within our … END_OF_DOCUMENT_TOKEN_TO_BE_REPLACED

Seat airbags have complicated the work of … END_OF_DOCUMENT_TOKEN_TO_BE_REPLACED

Upholstering a vehicle’s trunk can be … END_OF_DOCUMENT_TOKEN_TO_BE_REPLACED

Last year, we reported on the controversial … END_OF_DOCUMENT_TOKEN_TO_BE_REPLACED