This is seriously cool – Philips and German chemical giant BASF have teamed up to create a state-of-the-art roof for vehicle cabins. SmartPlanet says it looks like “a futuristic dentists chair, or perhaps even a new millennium toilet”. We think it looks and sounds amazing. You be the judge. 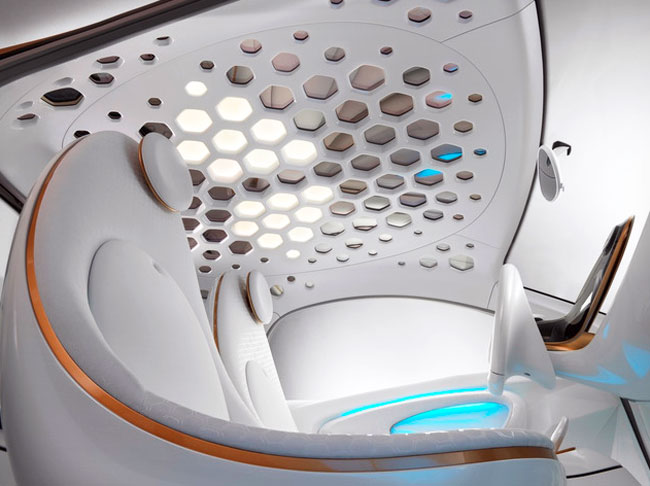 What is it? A solar-powered sunroof that uses OLED panels and transparent solar cells to create an open-air feeling and light the cabin.

It works like this: During the day, light shines through the panels on the cabin’s roof – acting like a sun roof (minus the wind). While light shines through the panels, solar cells attached to them trap energy from the sunlight. Through the flick of a switch, drivers can use that energy after nightfall to illuminate the panels and light the car’s interior. That light is only visible from within the cabin. It does not affect the way the car’s roof looks from the outside.

This combination allows the driver to enjoy a unique open-space feeling while it generates electricity during the day and pleasantly suffuses the interior with the warm light of the transparent, highly efficient OLEDs at night

The technology is not ready for production just yet. For OLEDs to be as practical as LED lights, “developers first need to improve their energy efficiency and resolution, enlarge them, and make them lighter weight and lower cost”, explains SmartPlanet. The science, however, is developing quickly.

What does it take to create an award-winning … END_OF_DOCUMENT_TOKEN_TO_BE_REPLACED

Sid Chavers is a legend in the craft of auto … END_OF_DOCUMENT_TOKEN_TO_BE_REPLACED

Once strictly a product of the aftermarket, … END_OF_DOCUMENT_TOKEN_TO_BE_REPLACED

To back or not to back? That is the question. … END_OF_DOCUMENT_TOKEN_TO_BE_REPLACED

Like most trimmers, we start each day with a … END_OF_DOCUMENT_TOKEN_TO_BE_REPLACED