Anyone who thinks that auto upholstery is a dying trade needs to check out Edge Automotive Interiors and meet the 26-year-old trimmer behind it, Stephen Palmer.

He’s only been in the trade four four years, but his work is that of a seasoned pro. With expert craftsmanship, cutting-edge designs and an impeccable attention to detail, Stephen is quickly making a name for himself in the UK, where he’s based, and the auto upholstery community at large.

In 2010, after only two years in the trade, Stephen’s passion and entrepreneurial spirit led him to open Edge Automotive Interiors in Rugby, England – where he continues to work with the goal of transforming his shop from a service to a known brand.

I recently had the opportunity to talk to Stephen about how he learned the trade, the obstacles he faces as a young trimmer and his perspective on the auto upholstery industry. Here’s what he had to say:

Why did you choose to start a career in auto upholstery?

Since I started driving, I was always interested in the interior side of cars – it’s the place you spend most of the time at the end of the day. When I got my first car, which was a Rover Metro, I drew out the door cards and seats and designed how I wanted them to look. And every new car I got, the first thing I wanted to change was the interior.

How did you learn the trade of auto upholstery?

My mum worked as a machinist back in the day in the sewing capital that was Leicester here in the UK. She did nothing like I do now – she was more on the knitwear and leisure wear side of things. She taught me how to use a machine and we attempted to re-trim my Peugeot 306 in Vinyl and fake suede. We did it on a domestic machine. We had a nightmare putting the re-used hog rings on with needle-nose pliers. I wish I had a picture of it, but that car is long gone.

I also got myself a book called “Custom Auto Interiors” by Don Taylor and Ron Mangus. I’d read through it and take as much in as possible.

I then contacted a local trim shop who advertised doing car interiors. I offered to work for free if I got taught the trade. When I got there, they weren’t really about car trimming at all. But I stuck around as the odd car came in so learnt the materials and tools needed. I lasted about 2 years there as I fell out with the Boss as he was very unappreciative of what I did for him.

What kind of sewing machines do you use?

I have a Kingmax GC1560 twin needle walking foot machine. I’ve always called myself a perfectionist, so I thought it was best to buy a twin when it came to french seams as with a single machine you run the risk of it being wonky or having different widths down the seam.

As for single needle, I just take one of the needles out along with the bobbin etc and away I go.

How would you describe your style?

That’s a hard one. I would say I go for a nice, clean, high-end finish – something you would find in Lamborghinis or Aston Martins for example.

Where do you get your ideas and inspiration for your designs?

Again, I look at the high-end cars. I like to give things a subtle concept look. But sometimes the customer just wants a nice simple re-trim. If I’m asked to design something, I spend a few hours looking around the internet or drawing up my designs on the computer. Here is an example: 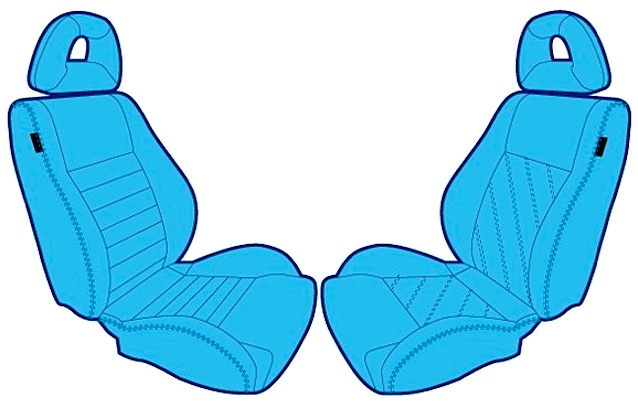 Sometimes I stumble across Ideas by accident, which always helps.

Which are your favorite types of vehicles to work with?

I don’t really have a favourite. I will work on any car. If I had a favourite of anything, I think it would have to be Recaro seats.

Which are your favorite types of materials to work with?

This all depends on what I’m trimming. I do a lot of dashboards and panels which I do in Alcantara – it’s a lovely material to work with if you treat it right. 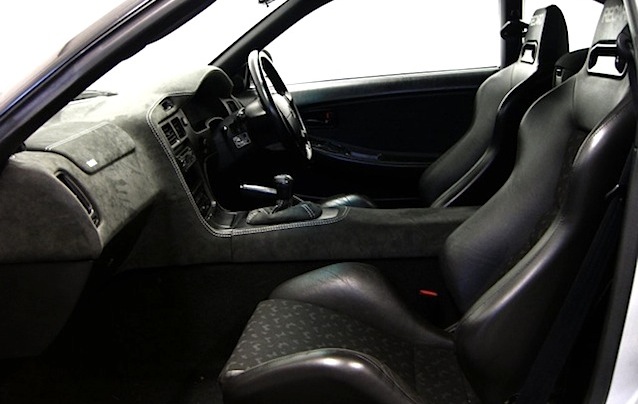 When it comes to seats and steering wheels you can’t beat Leather. They are the two main materials I use. In fact, I think I’ve only ever used vinyl on two jobs at most.

Are there any aspects of the trade you haven’t mastered yet and hope to learn?

I wouldn’t say I know everything, but I can’t think of anything specifically. I think you learn on every Job, no one job is the same.

I would like to build some seats from scratch, frame and everything, and then hopefully sell them as Edge Automotive seats as Recaro do now but I should imagine thats a long way off!

What auto trimmers do you look up to in this trade?

I’m not too sure really. It may be a little different over there, but trimming isn’t really a big deal over here and we don’t have any ‘famous’ trimmers, that I know of anyway.

The VW scene is big here in the UK and most probably in the US; and it might be something for you guys to look into not just the old bugs, but the newer cars – the Golf (Rabbits as they’re known), Jettas etc. I read an article on a car that had been modified over here. It was an American article and they said ‘they wish they had trimmers like us over there’, which I didn’t quite understand as you guys are clearly there. 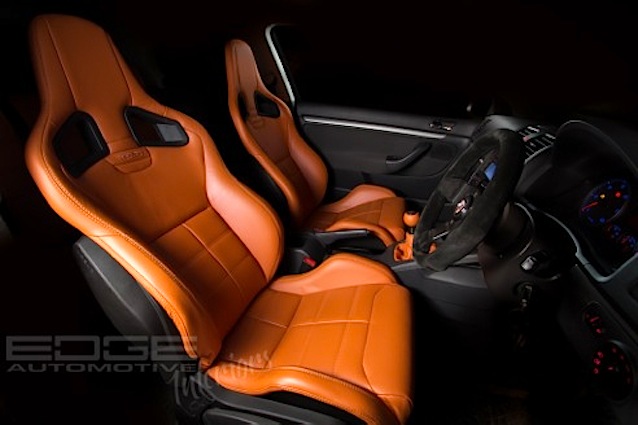 Most of my customers have stuff trimmed to customise their cars rather than restorations. The VW industry is massive like i said and people build cars to win trophies and without an interior you’re not winning a trophy.

A lot of other stuff I do is just a simple upgrade, especially on Renault Clios (not sure if you have them) where the Recaro seats wear within 20,000 miles. Poor design and materials cause them to wear so bad, so a leather re-trim gives them a longer life. Here they are, you will find a few of these on my website: 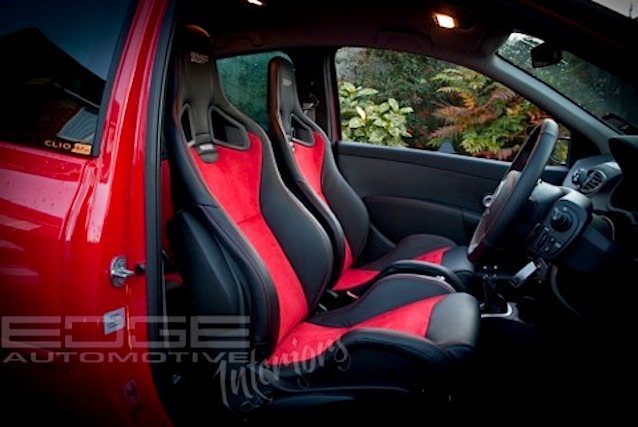 Some veteran trimmers have described our industry as a dying trade because of the lack of young trimmers learning the craft. What would you say to them?

I think the problem might be lack of interest in older restorations over customisation. I may be wrong as I don’t fully know what you guys do day in – day out. But most of the stuff I see is older vehicles being restored.

It’s also finding someone with the same drive and passion as us, which is difficult.

What obstacles, if any do you face as a young auto trimmer in our industry?

I would say money and time. I started with nothing. Luckily the sewing machine shop do a monthly payment on their machines. So with that, I built my own website and got advertising on forums with the only piece of work I had at the time, which was my Toyota MR2 seats which I trimmed at my old workplace. 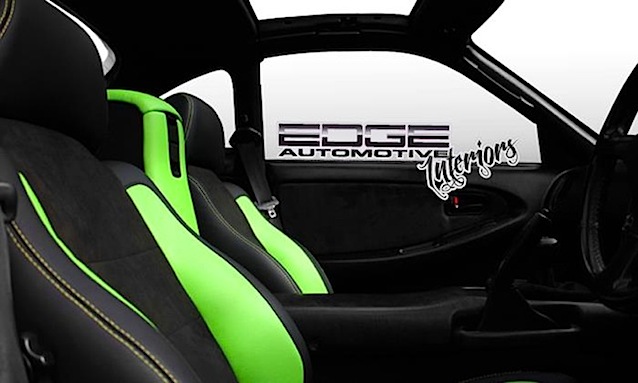 What advice would you give to a rookie upholsterer?

To never let anything out of his/her shop that he/she themselves would not accept.

There are times when things get tough and problems occur on a job and you just want it gone, but stick on it as it’s representing you and your company no matter how big or small the job.

Where do you see yourself in this industry in the coming years?

I’d like Edge Automotive to be seen as a brand, rather than just a service. So people come to me for what I am and want an ‘Edge Automotive Interior’.

In only four short years of trimming, Stephen has mastered some of the hardest jobs in our trade. Personally, I can’t wait to see the designs he’ll be creating in 10 to 20 years. With more young talented trimmers like Stephen emerging, the auto trim industry will surely thrive for years to come.

For more on Edge Automotive Interiors, check out its website: www.edgeautomotive.co.uk. Also, feel free to contact Stephen directly on The Hog Ring‘s Auto Upholstery Forum, where he posts under the screen name “Steve@EdgeAutomotive”.

Spring is around the corner – which means car … END_OF_DOCUMENT_TOKEN_TO_BE_REPLACED

I don't know about you, but Carlex Design's … END_OF_DOCUMENT_TOKEN_TO_BE_REPLACED

Not every tool you own needs to be a Snap-On, … END_OF_DOCUMENT_TOKEN_TO_BE_REPLACED

Although our "Meet the Trimmer" series … END_OF_DOCUMENT_TOKEN_TO_BE_REPLACED

Every auto upholstery shop can benefit from … END_OF_DOCUMENT_TOKEN_TO_BE_REPLACED