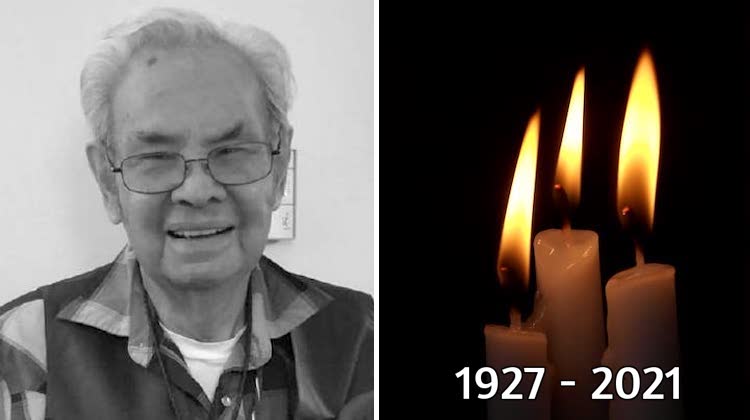 Bob was born October 8, 1927 in Val Marie, Canada, and was a proud member of the Little Shell Chippewa Tribe of Montana and Metis of Canada.

As a child, his family traveled throughout the North in a horse and buggy, before settling in Malta, Montana.

Bob was a hard worker his whole life. At the age of 10, he took a job working on the railroad. At 17, he and three friends hitchhiked to San Francisco to join the Navy.

Bob and Ramona, who were married for 55 years, had nine children. To support them, Bob became an underground miner and trimmer, restoring the interiors of old cars and vans.

“He was a devoted father who enjoyed camping and boating with his children and grandchildren,” his obituary says. “He was also a fun-loving prankster who loved to joke around and visit with his many friends and family in Butte and beyond.”

In his free time, Bob was involved with the North American Indian Alliance. He was an expert tipi maker and enjoyed attending powwows.

Oksana Ignatova of Stitch Girl Inc is a … END_OF_DOCUMENT_TOKEN_TO_BE_REPLACED

In the craft of auto upholstery, where … END_OF_DOCUMENT_TOKEN_TO_BE_REPLACED

It’s no wonder the 1932 Ford Roadster is … END_OF_DOCUMENT_TOKEN_TO_BE_REPLACED

Mondays can be a drag — especially those that … END_OF_DOCUMENT_TOKEN_TO_BE_REPLACED