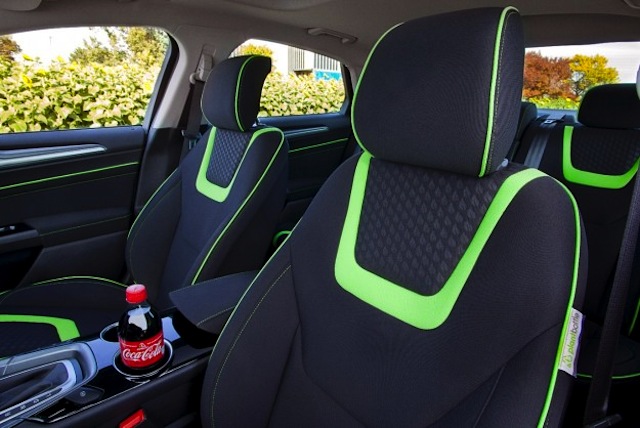 Ford Motor Company and Coca-Cola partnered to create the above car interior for the Ford Fusion Energi plug-in hybrid. The fabric used on the seat cushions, seat backs, head restraints, door panel inserts and headliner is made from repurposed Coca-Cola bottles – which, themselves, are made from plants.

Of course, this isn’t the first time we hear of vehicles trimmed in plastic bottles. At least year’s North American International Auto Show in Detroit, Ford debuted “Repreve” – a fabric made from upcycled plastic bottles. Also, the Nissan Leaf has been upholstered in a similar fabric since 2011.

The goal, of course, is to meet new EPA standards imposed on automakers to produce more eco-friendly cars. According to business blog PSFK, plant-bottle materials can go a long way in doing just that.

The potential energy savings and environmental benefits if the material was rolled out across Ford’s current vehicle line are impressive. Ford projects it would displace nearly 4 million pounds of petroleum-derived materials, as well as save the equivalent of 295,000 gallons of gasoline and 6,000 barrels of oil. [more]

It’s nice to see two of the world’s most recognizable brands teaming up to produce something so positive. The question is, when will DLTL Upholstery Supply start selling Coca-Cola by the yard?

Automotive interiors are in a constant state … END_OF_DOCUMENT_TOKEN_TO_BE_REPLACED

You won't find a lot of auto upholstery shops … END_OF_DOCUMENT_TOKEN_TO_BE_REPLACED

Last month there was a lot of talk within our … END_OF_DOCUMENT_TOKEN_TO_BE_REPLACED

In recent months, there’s been some talk … END_OF_DOCUMENT_TOKEN_TO_BE_REPLACED