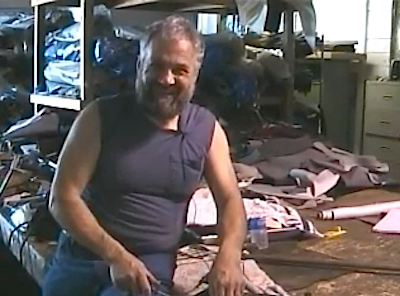 WOWK, a local TV news channel in West Virginia, recently aired the inspirational story of Jack Waldron, owner and operator of JW Auto Upholstery. Waldron, who has been in business since 1978, became a paraplegic in ’73, after breaking his back in a life-changing car accident. While others in Waldron’s position may have wallowed in sorrow, Waldron decided to not allow his handicap to slow him down. He learned how to stand on two feet, enrolled in an auto trim training program and went into business for himself.

Despite his disadvantage, WOWK says that Waldron’s “hands are like vice grips.” Waldron explains: “You gotta have pretty strong hands to do this kinda work, you know it? Convertible tops, I put carpets in, I do seats, I do a lot of equipment seats for companies during the winter and headliners. Do a lot of headliners for cars.”

He later adds, “Lot of guys ask me ‘why aren’t you drawin’ social security?’ I say ‘I should be…I’d rather work.'”

Not surprisingly, WOWK describes Waldron as having a “Mountaineer work ethic and a never-say-die spirit.” We can see why. Jack Waldron is an inspiration to honest, hard-working folks everywhere. We’re particularly proud to call him a fellow auto trimmer.

You know how to work a sewing machine, but do … END_OF_DOCUMENT_TOKEN_TO_BE_REPLACED

Since launching The Hog Ring Design Studio in … END_OF_DOCUMENT_TOKEN_TO_BE_REPLACED

Big news for Volkswagen fans! As per your … END_OF_DOCUMENT_TOKEN_TO_BE_REPLACED

The third and final installment of our … END_OF_DOCUMENT_TOKEN_TO_BE_REPLACED