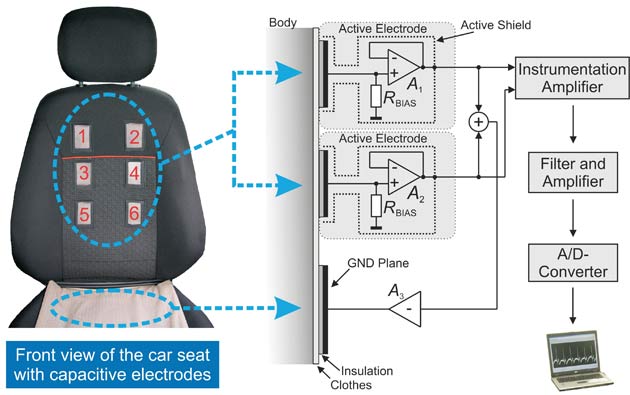 Macho Man Randy Savage recently died after suffering a heart attack while driving. He lost control of his car and crashed. Ford Motor Company, however, is taking steps to ensure that tragedies like this don’t happen again.

By combining their car seats with electrocardiograph (ECG) technology, Ford has created a prototype car seat that can detect heart attacks before they occur – allowing drivers to pull over and seek help before it’s too late.

According to a Ford press release:

The prototype Ford seat employs ECG (electrocardiograph) technology that monitors the heart’s electrical impulses and detects signs of irregularity that can provide an early warning that a driver should seek medical advice, because he might be impacted by a heart attack or other cardiovascular issues. Whereas a normal ECG machine in a doctor’s office requires metal electrodes to be attached to the skin at various points on the body, the Ford ECG seat has six built-in sensors that can detect heart activity through the driver’s clothing.

Ford also plans to develop a system in which the seat’s sensors automatically alert emergency medical workers of the driver’s heart condition before, during and after complications began. So far, the prototype seat seems to be working just fine.

In early tests, the Ford heart monitoring seat has recorded accurate readings during 98 per cent of driving time for 95 per cent of drivers. Ford’s research engineers are continuing to study how sensors can be made to record signals through a greater number of materials including those that interrupt readings with their own electrical activity.

How such technological advancements in car seats will affect independent auto trimmers remains to be seen. However, one thing is for sure: to stay relevant and competitive, auto upholstery professionals will need to update their knowledge and training just as fast as auto makers are pumping out new technology.

The popularity and timeless design of the … END_OF_DOCUMENT_TOKEN_TO_BE_REPLACED

How would an old school Mercedes-Benz look … END_OF_DOCUMENT_TOKEN_TO_BE_REPLACED

We know that Bentley Motors creates some of … END_OF_DOCUMENT_TOKEN_TO_BE_REPLACED

Did you know that in an effort to attract … END_OF_DOCUMENT_TOKEN_TO_BE_REPLACED

Rolls-Royce Motor Cars is renowned for its … END_OF_DOCUMENT_TOKEN_TO_BE_REPLACED

I recently had the opportunity to work on a … END_OF_DOCUMENT_TOKEN_TO_BE_REPLACED