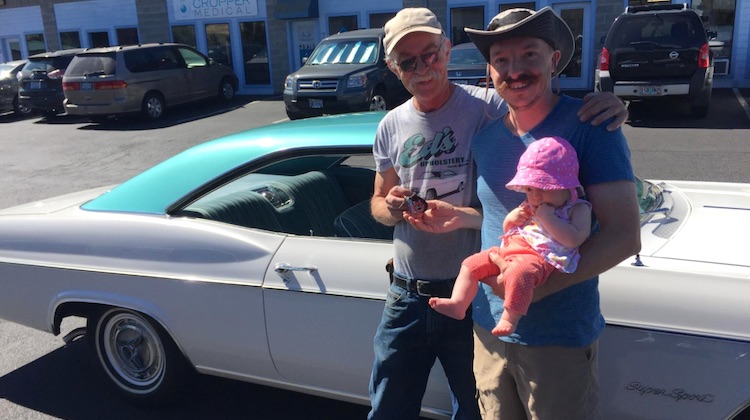 Every auto upholstery shop has a project car. But Ed’s Upholstery in Ashland, Oregon, has a 1966 Chevrolet Impala with a particularly unique backstory.

Shop owner Ed Pickering has been promising to hand over the keys to son Dwight since August 29, 1985 — the day he was born in the backseat.

Of course, neither Ed nor his wife planned to deliver a baby in the car, but they couldn’t get to the hospital quick enough. Minutes before reaching their destination, on the corner of North Main and Grant Street, Ed’s wife delivered a healthy baby boy.

Since that day, Ed has promised to gift the Impala to his son on his 30th birthday.

Dwight turned 30 two years ago, but the Impala was in no shape to drive — so Ed embarked on a mission to restore the car to its former glory.

According to Ashland Daily Tidings, Ed pulled out all the stops. He hired an ace mechanic to rebuild its powertrain and had the vehicle shipped to Los Angeles for a master painter to disassemble and spray Irma White and Artisan Turquoise. Of course, Ed – who’s been a trimmer for more than four decades – upholstered the interior himself.

In the end, Ed transformed the battered Impala into a showroom quality classic that a rare car dealer appraised for $45,000.

“This car has always been around our home, where I grew up,” Dwight told Ashland Daily Tidings. “Dad promised to restore it and present it to me when I was 30. I had my doubts it could be restored. It was dirty and beat up, but here it is. It’s an amazing job.”

Ed finally gave Dwight the keys a few weeks ago, fulfilling his promise and bringing the story full circle. Dwight, who now has a child of his own, plans to keep the car and perhaps even pass it to the next generation.

Ever have a customer come to your shop with a … END_OF_DOCUMENT_TOKEN_TO_BE_REPLACED

In April, I wrote an article titled "Why I … END_OF_DOCUMENT_TOKEN_TO_BE_REPLACED

Everyone that calls your auto upholstery shop … END_OF_DOCUMENT_TOKEN_TO_BE_REPLACED

Faurecia, one of the largest automotive … END_OF_DOCUMENT_TOKEN_TO_BE_REPLACED