Remember the Nauga – that mythical creature from which Naugahyde supposedly comes from? In the 1960’s and 1970’s you couldn’t turn on the TV without seeing one. Today, they’re still spearheading marketing campaigns for the all-American brand of artificial leather. In fact, you can even adopt a Nauga through Naugahyde‘s website.

Cheaper imports have made it so that Naugahyde no longer dominates the market for faux leather, but customers who pride themselves on buying American still ask for it. So why not read up on a bit of its history? It may come in handy during a sales pitch.

Pennsylvania’s The Mercury recently published an article titled “Where did Naugahyde come from?” that does a great job of summarizing how the fabric came to be:

It could be argued that Naugahyde started in Newburg, N.Y. The Fabrikoid Company, a small textile business in the Hudson Valley, had been working on creating artificial leather materials, particularly for use in the carriage and luggage trade and the growing automotive market. Leather had been used throughout human history for clothing, shelter, tools and many other purposes, including upholstery and footwear. People had tried to create synthetic versions of the versatile material but it wasn’t until the Industrial Revolution that some promising developments came into being. […]

Fabrikoid quickly found its way onto automobile tops and upholstery and luggage. Its success was noticed by the DuPont Company, and in 1910, they purchased Fabrikoid for $1.2 million. […]

In 1936, chemists at the U.S. Rubber Company’s plant in Naugatuck, Conn., came up with a knit fabric backing coated with polyvinyl chloride (PVC) that was an excellent leather substitute. They named it Naugahyde, after the location at which it was developed. Naugahyde came into widespread use in the ‘50s and ‘60s and was seen everywhere in auto upholstery and household furniture. [more]

If, however, what you’re interested in is the Nauga, you’ll be happy to know that Naugahyde has gone to great lengths to develop the creature’s backstory. It’s fun, entertaining and very ridiculous. For instance, Naugahyde writes:

One prominent historian believes the first Naugas arrived in America in 1778 when they delivered designer clothes from France to George Washington’s Continental Army. Others suggest they arrived far earlier, pointing out an abandoned tenth century Viking settlement that was recently unearthed in Newfoundland. Among the tantalizing evidence is the discovery of two Nauga names, Olaf the Red and Erik the Navy Blue, on a fragment of stone tablet at the site. [more]

Rest assure that Naugahyde is a “cruelty-free fabric” – as “Naugas shed their hydes with no harm to themselves”. 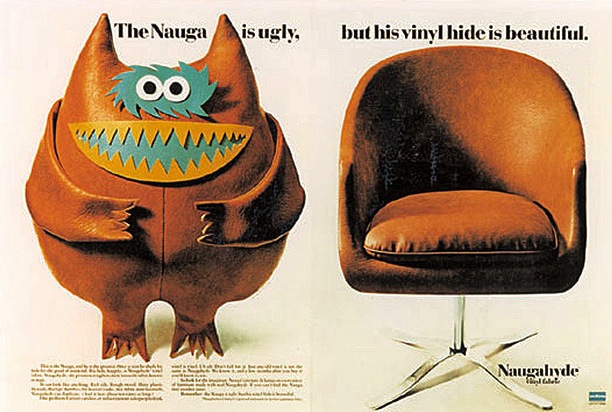 Everyone that calls your auto upholstery shop … END_OF_DOCUMENT_TOKEN_TO_BE_REPLACED

The Hog Ring Design Studio is a growing … END_OF_DOCUMENT_TOKEN_TO_BE_REPLACED

In September, we reported on a new trend in … END_OF_DOCUMENT_TOKEN_TO_BE_REPLACED

Big news for Volkswagen fans! As per your … END_OF_DOCUMENT_TOKEN_TO_BE_REPLACED

For many years, there has been confusion … END_OF_DOCUMENT_TOKEN_TO_BE_REPLACED