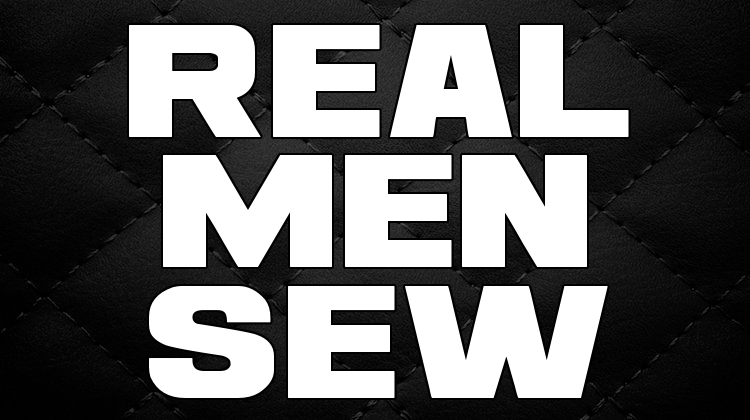 Real men sew. We’ve always known that. But it seems Hot Rod Network is only now realizing it.

In an article published this week, the popular website announced that it’s rolling out a new article series teaching car builders how to sew their own interiors.

The first article in the series, “How to Thread an Industrial Sewing Machine,” kicks off with the following intro assuring men that our craft isn’t “girly” and that it’s okay to want to learn how to sew.

It seems we’ve mastered every part of the car-building process. When our engines wore out, we bought a book and rebuilt them. When the body shop gave us our first estimate, we learned how to paint. We figured out how to adapt air conditioning and we’ve even gone as far as buying the specialized tools necessary to rebuild an automatic transmission.

But there’s one component of car construction that makes most of us recoil in fear: upholstery. When diehards brag about how they built something, they usually do it with the following caveat: “Yup, I did everything … but the interior.”

So why is upholstery so taboo? I’m going to go out on a limb here and hazard a guess: the act of sewing really intimidates us. And by us, I mean men.

No, really. Sewing has some baggage and we guys are suckers for buying into it. We’re taught early on that sewing is kinda girly. Your mom sewed patches to your jeans. Your sister sewed a dress in Home Ec. Plus a lot of us are afraid of sewing our fingers together. These fears foster a kind of noble ignorance: we’re intrigued but remain largely intimidated.

If you’re willing to overcome your fears then we have good news for you: more than fairly simple, sewing is actually really rewarding. Yeah, trim work is one of those things that’s difficult to master but at its heart it’s really not all that hard to learn.

And we’re going to show you how.

I appreciate Hot Rod Network helping to set the record straight. But I’m annoyed that in 2018 we still have to remind people that our craft is legitimate and worth learning.

How fragile are some mens’ egos that they’re too afraid to learn how to sew because they think it might detract from their masculinity?

Please, spare me the bullshit…

Auto trimmers spends 40+ hours a week sitting in a garage surrounded by awesome cars, where they operate a large industrial machine that pierces through animal hide at blazing speeds.

It requires a steady hand, aesthetic eye and exhaustive attention to detail, especially when sewing crazy pleats. And don’t forget about design and patterning, which rely on creativity and a solid mathematical foundation.

From where I sit, auto upholstery doesn’t sound demasculating at all. In fact, anyone who pokes fun at our craft probably isn’t man enough to master it.

Spring is around the corner – which means car … END_OF_DOCUMENT_TOKEN_TO_BE_REPLACED

I found a tag attached to the bottom of a … END_OF_DOCUMENT_TOKEN_TO_BE_REPLACED