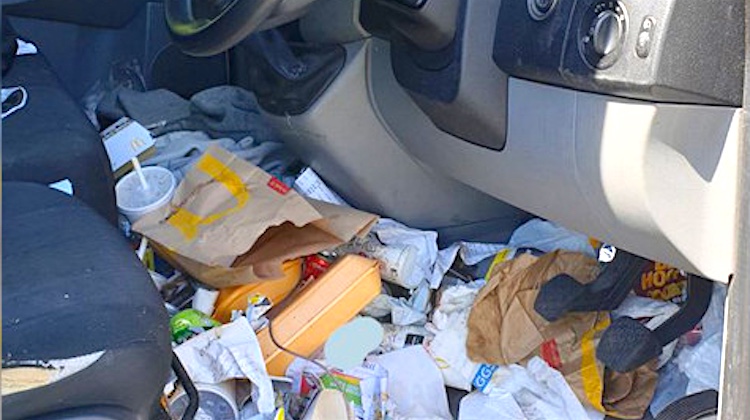 An English police officer recently fined a driver for having a dirty car interior.

Thames Valley Roads Policing Unit pulled over a driver for unrelated matters when they noticed his filthy cabin. Officers said there was a “dangerous” amount of fast-food wrappers and other trash piling in the car.

There was even “rubbish under [the] floor pedals,” potentially obstructing the car’s brakes, police said.

They shared a photo of the cabin on Twitter, along with the caption: “A tidy cab = A tidy mind.”

The photo showed everything from McDonald’s wrappers to styrofoam cups, receipts and other garbage strewn about the seats, floor and dashboard.

The mess was so extreme that an officer issued the driver a ticket and points on his license. Police also arrested the driver for an unrelated matter.

Given that the average steering wheel is filthier than a toilet seat, we shudder to think what type of nasty bacteria is growing in this car.

Without a doubt, this driver is the type of person to bring his car into an auto upholstery shop and ask for a repair without any regard for our health or wellbeing. Personally, I’m happy he got fined.

Thanks to a regular appearance on Discovery … END_OF_DOCUMENT_TOKEN_TO_BE_REPLACED

We at The Hog Ring are excited to share with … END_OF_DOCUMENT_TOKEN_TO_BE_REPLACED

To honor the first-generation Dodge … END_OF_DOCUMENT_TOKEN_TO_BE_REPLACED

This is the first in a new series of articles … END_OF_DOCUMENT_TOKEN_TO_BE_REPLACED