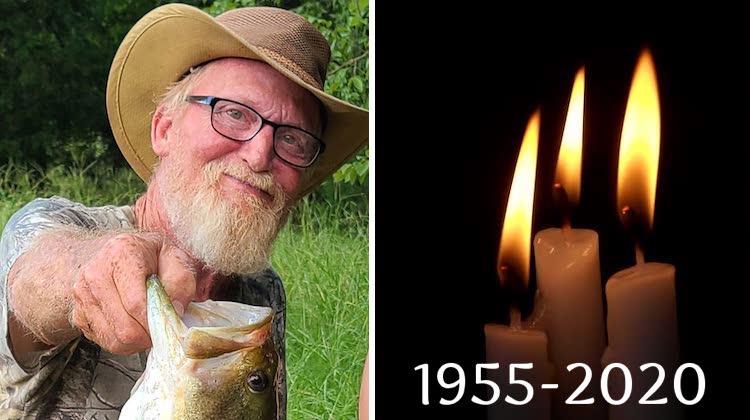 Lee was born and raised on his family’s farm in Elwood. Shortly after graduating South Garland High School, where he was considered a “hell raiser,” he married his sweetheart Karen Kannada. They had three daughters and were married for 37 years before ultimately splitting.

He worked as an auto and aviation upholsterer to support his family. “If Lee was anything consistently, he was a provider,” his obituary says.

Lee was also an avid hobbyist, always keeping himself busy with a new and exciting project.

His obituary explains: “Lee also did a little bit of everything. He renovated his and Karen’s first home, and fixed nearly any auto problem that arose. He had the greenest thumb, and was largely responsible for the most vibrant flower gardens at home and the greenest yard in Caddo Mills. He built intricate airplanes at the kitchen table, which he would crash spectacularly when he flew them at the high school parking lot across the field. He grew orchids in the family’s home office, outfitting the whole room with grow lights. He liked to go duck hunting, fishing, and camping. He taught himself to play golf. There was a family trip to Six Flags nearly every year. He built a koi pond in the backyard and was an animal whisperer. He had many dogs and cats, and eventually a saltwater fish tank. Lee liked hobbies, and he liked them big.”

After splitting from Karen, Lee moved back to his parents’ farm, where he built himself a house and continued to care for the family’s land.

“He was proud of the house he built, and the beautiful land on which it sits. He was proud of his Harley. His pool stick. His garden and orchard. His dogs. His wit. His ability to do anything he decided to do. I believe he was proud of his life, even though it wasn’t perfect. It was a good life,” says his obituary.

Lee died on November 12. May he Rest In Peace.

On the outskirts of Sydney, Australia, in the … END_OF_DOCUMENT_TOKEN_TO_BE_REPLACED

Sid Chavers is a legend in the craft of auto … END_OF_DOCUMENT_TOKEN_TO_BE_REPLACED

When Troy Trepanier of Rad Rides by Troy … END_OF_DOCUMENT_TOKEN_TO_BE_REPLACED

Wisdom often comes from experience, and a lot … END_OF_DOCUMENT_TOKEN_TO_BE_REPLACED

Does your auto trim shop have a slogan? If … END_OF_DOCUMENT_TOKEN_TO_BE_REPLACED

Want to learn how to bind an isolated hole in … END_OF_DOCUMENT_TOKEN_TO_BE_REPLACED