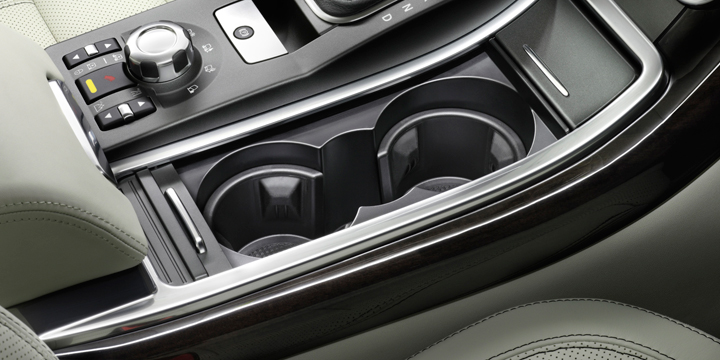 In 2004, Slate published an article titled “Drink Me: How Americans Came to Have Cup Holders in Their Cars.” Though the article is seven years old, it still makes a great read – especially if you geek out on the history of cars as much as I do. But even if you don’t, it’s chock full of interesting tidbits that you can use to impress customers. For instance, did you know that part of the reason why Americans began switching to automatic transmissions is because they needed a free hand to hold drinks while driving?

The history of automobile interior design has been one of incorporating nonessential features that subsequently became indispensable. … Today, that feature is the car cup holder—now considered to be so essential that many consumers wonder why it took so long to arrive. […]

Eating and drinking in (parked) cars became popular with the rise of the drive-in restaurant and theater. In a sense, the tray that hooked on to the partially rolled-up window is the antecedent of the automobile cup holder. The tray was typically located on the driver’s door, and back-seat passengers had to put their cokes and malts down on the floor and remember not to kick them over

Eventually, the front-seat passenger was able to open the glove compartment door and sit a glass or cup or two on the door-cum-table. But leaving the drive-in with an unfinished drink usually meant holding the cup gingerly and hoping it didn’t spill. Early attempts by carmakers to add grooved depressions to the glove compartment door—like those on airplane tray tables—checked sliding but not bouncing and sloshing.

In the 1960s…coffee cups shaped like Mercury capsules—with their wider bottoms—provided some stability for drinks placed on the floor or dashboard. But the introduction of easy-open aluminum beverage cans posed a new dilemma for drivers: Where to place the light and slender can when shifting gears? (The American penchant for automatic transmissions is not independent of the national passion for cup holders.)

The first true cup holders were primitive and garish and non-integral to the car’s design. Mostly, they were plastic holsterlike devices that hooked on to the inside of the door, staying in place whether the window was up or down. Any cup holder attached to a car door is an invitation to disaster, of course: Doors are opened, closed, and sometimes slammed with gusto.

In time, cup holders were built into the console between seats and other less mobile parts of vehicles. [more]

Today, cup holders are are big enough to fit Super Big Gulps. Some are even wired to keep drinks hot or cold. And as if that weren’t enough, many cars also come with mini fridges and coolers built right into their cabins.

At this rate, cars may one day feature sushi belts too…

What did auto trim shops look like 150 years … END_OF_DOCUMENT_TOKEN_TO_BE_REPLACED

Our quest to bring you exclusive interviews … END_OF_DOCUMENT_TOKEN_TO_BE_REPLACED

Elite trim shops do more than cut, sew and … END_OF_DOCUMENT_TOKEN_TO_BE_REPLACED

Did you know that in an effort to attract … END_OF_DOCUMENT_TOKEN_TO_BE_REPLACED