In June 1960, a man named Wes Jayne in Woodhaven, New York, wrote a letter to Popular Science magazine boasting about how he finally convinced his wife to wear a seat belt. However, his victory wasn’t the result of rational argument or even trickery. It was clever engineering.

What Jayne did is rig his car’s front passenger seat to sound an annoying buzzer and flash a dashboard-mounted light until she strapped herself in — both securing her safety and inadvertently inventing the first seat belt alarm.

For 10 years I have used safety belts in my car. But each time we went for a ride I have had to tell my wife to fasten her belt. She is a most stubborn person and uses all kinds of excuses for not doing so.

I have finally won. These drawings show how. The system tells her to put the belt on. It works like magic every time. It saves arguments. The little reminder consists of a light, the words “Safety Belt,” a buzzer, and two cunningly wired snap switches.

When my wife gets into the front seat beside me, her weight trips a normally open snap switch under the seat. Two things happen: First a doorbell buzzer begins sounding behind the dash, attracting my wife’s attention toward it. Second, in the opening where a clock usually is mounted, the words “Safety Belt” are illuminated by a lamp behind the dash.

The second snap switch, normally closed, is mounted under one strap of the belt so that it is opened by the pressure of pulling the belt across the waist. This breaks the circuit, stopping the buzzer and turning off the lamp. As long as my wife sits in the seat, she’d better have the belt on correctly or the buzzer will let her know. [Editor’s note: An optional cut-out switch is shown in the drawing for those who might like one.]

Now, when we start out, she races me to fasten the belt before I can use the ignition key and turn on the circuit. Seems she doesn’t like to hear the buzz. The only way to stop the buzz is to get out of the seat or turn off the ignition — or put on the belt. If she wants to go for a ride that leaves her little choice.

Check out the original letter, including a helpful drawing of the alarm system, below: 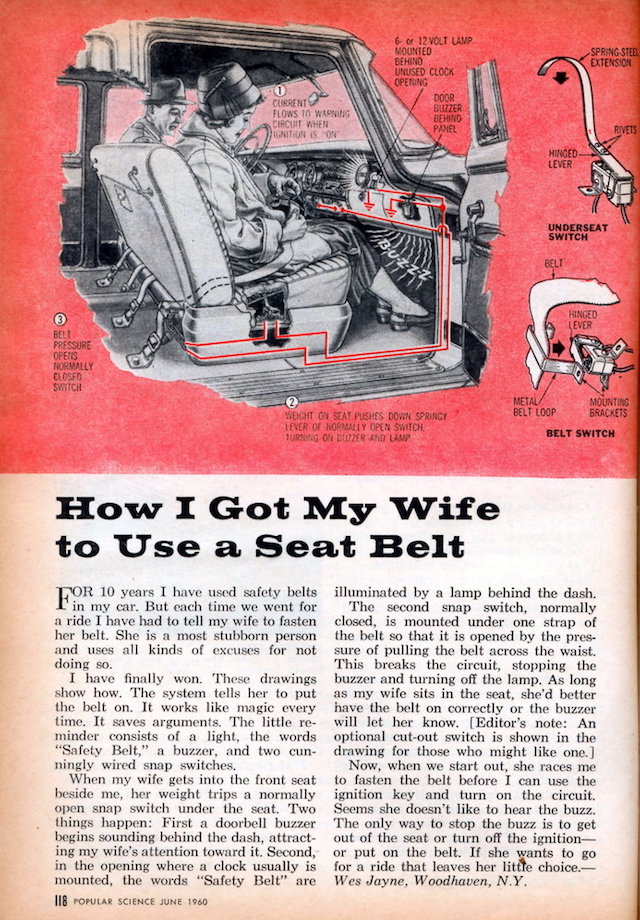 Note that Jayne invented his seat belt alarm in 1960. However, American cars did not feature a similar system until the early 1970s. While it’s not clear if Jayne had any hand in convincing automakers to equipped their cars with seat belt alarms, one thing’s certain: He pioneered the technology in the U.S.

I don't know about you, but Carlex Design's … END_OF_DOCUMENT_TOKEN_TO_BE_REPLACED

You may not have heard of flocking, but … END_OF_DOCUMENT_TOKEN_TO_BE_REPLACED

We interview a lot of master craftsmen, but … END_OF_DOCUMENT_TOKEN_TO_BE_REPLACED

Lost your hog ring pliers? Ran out of hog … END_OF_DOCUMENT_TOKEN_TO_BE_REPLACED

What did auto trim shops look like 150 years … END_OF_DOCUMENT_TOKEN_TO_BE_REPLACED