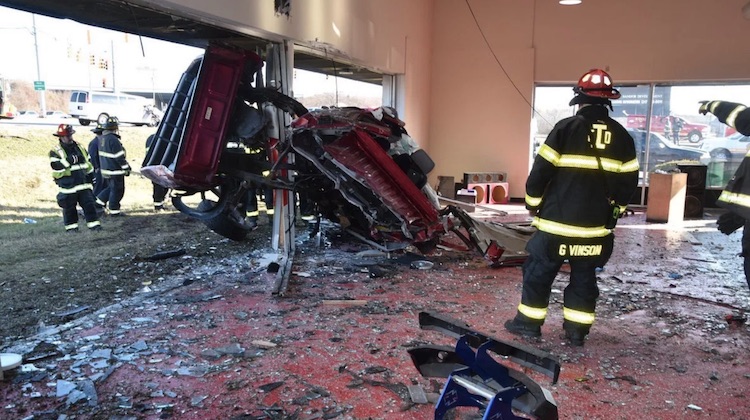 A driver lost control of his truck and smashed into Indy Customs in Indianapolis, Indiana, early last month, days before the shop’s scheduled grand opening.

Indy Customs is a vehicle accessories shop that specializes in upholstery, tires and tinting.
While traveling at a high rate of speed, the truck clipped a van, hit a utility poll and went airborne before crashing into the shop, according to the Indianapolis Fire Department (IFD).
The driver was critically injured and taken to nearby Sindey & Lois Eskenazi Hospital. The eight people inside the van — including seven teenagers — walked away uninjured. However, the crash significantly damaged Indy Customs.

Shop owner Scott Hill was on his way to work when he received word of the crash.

“I was trying to understand at that point,” Hill told CBS4. “Obviously, my heart sank and I didn’t know what was going on. I just wanted to get here and make sure everyone was alright.”

The truck was removed from the building in several large pieces, according to The Indianapolis Star.

Photos released by IFD show the truck and building destroyed beyond recognition.

9:52 AM – Driver (44) critical after his truck comes off I65S at 38th & Industrial Blvd. clips van, goes airborne and hits building. 7 teens & 1 adult driver (18) in white van OK. All transported to Eskenazi. 1 inside bldg ok – scheduled to have a grand opening on Saturday pic.twitter.com/39rE0wt1Zw

Indianapolis Metropolitan police are still investigating the cause of the crash. IFD assessed the structural stability of the building and found they did not need to reinforce the structure.

It’s impossible to tell when an accident is going to occur. Still, shops can take steps to limit their losses — such as storing combustible items properly, ensuring their buildings are up to code, and staying on top of their insurance policy coverage terms and payments.

Also, please join us in wishing the injured driver and Indy Customs a speedy recovery.

Thanks to a regular appearance on Discovery … END_OF_DOCUMENT_TOKEN_TO_BE_REPLACED

Giving fair price estimates is one of the … END_OF_DOCUMENT_TOKEN_TO_BE_REPLACED

Everyone that calls your auto upholstery shop … END_OF_DOCUMENT_TOKEN_TO_BE_REPLACED

Every auto upholstery shop has a project car. … END_OF_DOCUMENT_TOKEN_TO_BE_REPLACED

I recently had the opportunity to work on a … END_OF_DOCUMENT_TOKEN_TO_BE_REPLACED