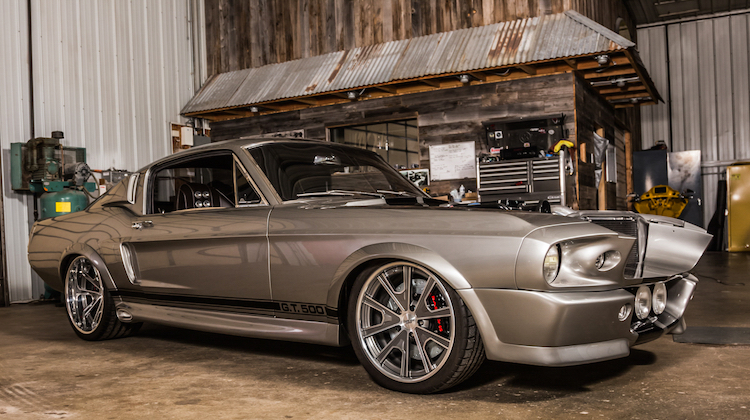 Elite trim shops do more than cut, sew and install auto upholstery. They employ a range of disciplines to custom fabricate nearly every element of a vehicle’s interior.

It’s the type of work that places equal value on form and function, and requires both to be absolutely perfect.

Case in point: Check out the stunning interior in this 1967 Ford Mustang that was built, designed and trimmed by Customs by Vos in Griffith, Indiana.

Master trimmer Dave Vos said the owner brought them the vehicle completely gutted, and upped the challenge by asking them to make its interior resemble that of a Ford GT40.

Of course, they accepted.

“We didn’t want it to look like we took a GT40 and stuffed it in his car,” said Dave. “So we added our own design touches to it.”

We recently caught up with Dave, who gave us the inside scoop on what it took to create this incredible cabin.

Through a lot of hard work, Customs by Vos transformed a pair of bland aftermarket bucket seats into the focal point of the Mustang’s interior.

“First we stripped the seats down to their metal frames,” said Dave. “We then restructured the seats to fit the car and the owner, while trying to achieve the desired look.” 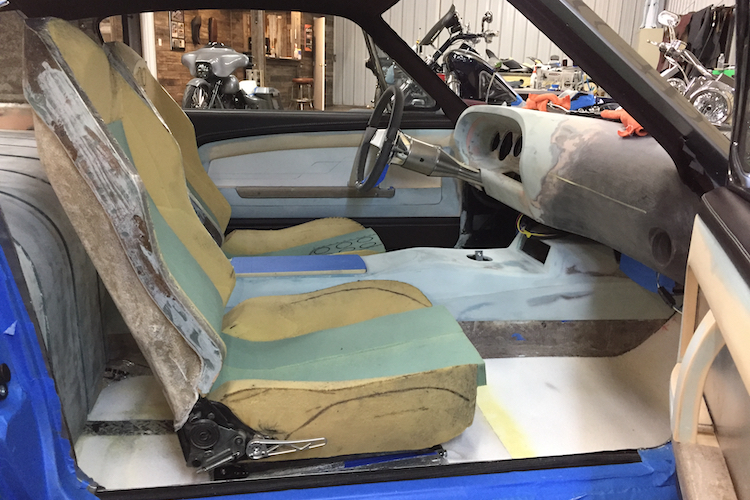 “Once we had two solid seat frames, we built up a couple different densities of foam that we hand carved to get a smooth final shape,” he added.

After sanding and shaping the foam to create two identical seats, patterns were made for the upholstery. Customs by Vos sourced supple brown leather from Hydes Leather, which they cut and stitched to make the seat covers. The team then adorned the upholstery with beige contrast thread in their signature double topstitch. 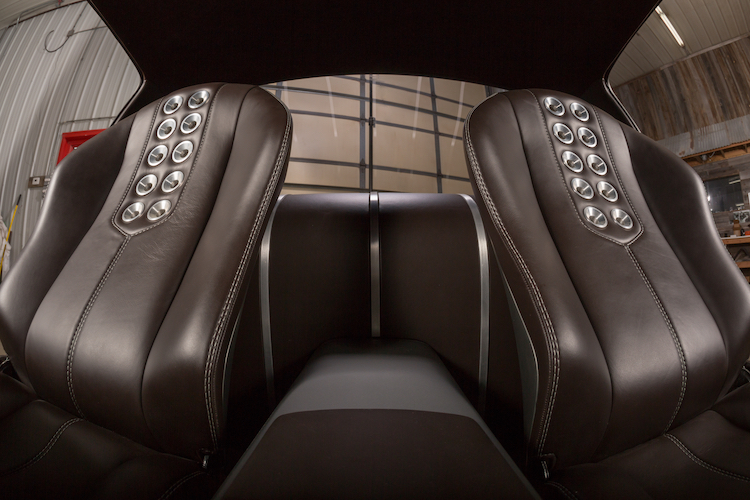 To pay homage to the Ford GT40, Customs by Vos decorated the seats with 16 CNC-cut aluminum rings placed symmetrically on each cushion and backrest. Matching the aluminum rings are a pair of Clayton Machine Works recliner levers.

The team also made custom seat back plates from fiberglass, which they body-worked for a smooth finish and painted to resemble brushed aluminum. 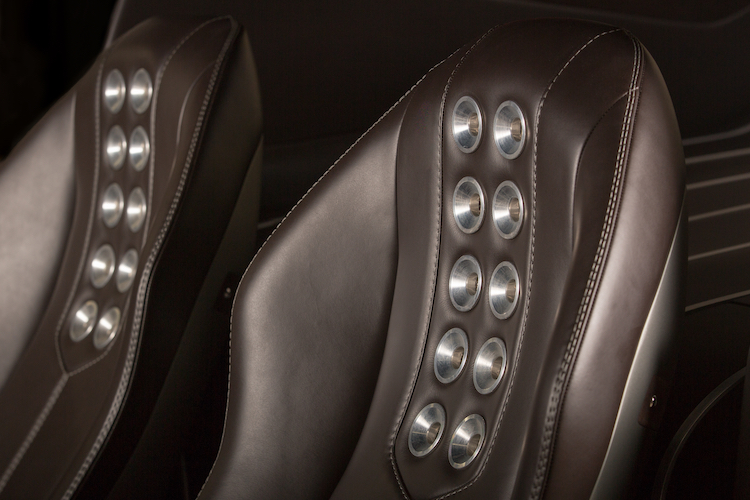 The seats, which took more than 200 hours to complete, turned out both luxurious and sporty.

Customs by Vos had to create a GT40-inspired dashboard from scratch, as the vehicle’s interior was gutted.

“When we first got the car, there was nothing in it,” said Dave. “The only thing we had to work with was a steering column that didn’t fit and a set of authentic GT40 gauges.” 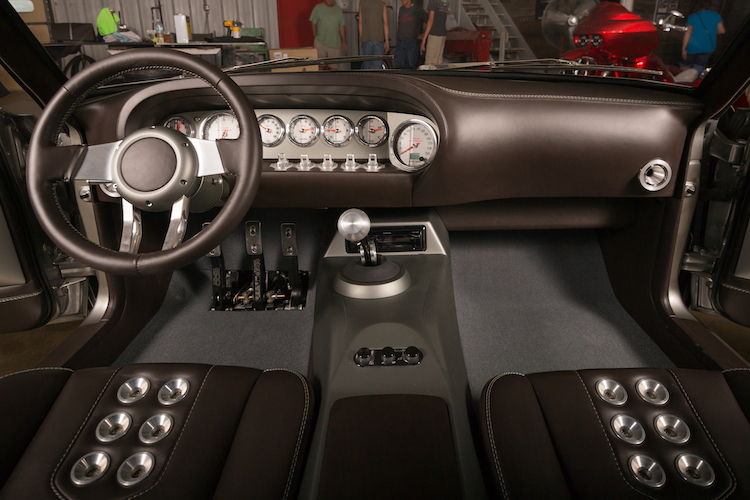 The team began by creating a mold for the dashboard.

“Out of aluminum, paper, cardboard and tape we created the first step in a mold to resemble a GT40 dash,” said Dave. “Once we had a good shape for our mold, we fiberglassed it, which gave us a great structure to start with. From there we added aluminum braces and mounts to the structure, so that we could install it in the car.”

“When the dash was mounted in the car we were then able to configure and wire up the gauges and switches. We also had to mount the A/C system and run the lines to the vents that we installed in the dash. Once we had every dash component mounted in place, we lightly body-worked the surface and painted it in primer.”

After constructing the dashboard, the team removed it from the vehicle and stripped off all the components. They then made a pattern, which was cut from leather, stitched together and glued onto the fiberglass.

They then remounted all the components and reinstalled the dashboard in the cabin.

Replicating the center console of the Ford GT40 was crucial in pulling off the inspired look of the Mustang’s interior.

“We started the console by pulling a fiberglass mold from the transmission tunnel and part of the floorboard,” said Dave. “Once we had a mold, we were able to create a base for the console to sit on. That base was then wrapped in leather.”

After the base was constructed and trimmed, the team began constructing the console.

“We poured a two-part expanding foam to give us a raw structure to carve the shape of our console,” said Dave. “When we achieved the desired shape, we then mounted the A/C controls, radio, and built a storage area with a thin armrest pad. After all of the console components were mounted, we lightly body-worked it and sent it to paint.”

Dave is particularly proud of the shifter. “We modified one of the seat buttons to fit inside the shifter to help the design flow,” he said.

Oversized wheel wells were required to accommodate the massive rear wheels and tires of the Mustang, which left no space for a backseat. This presented no problem, as the GT40 was a two-seater. 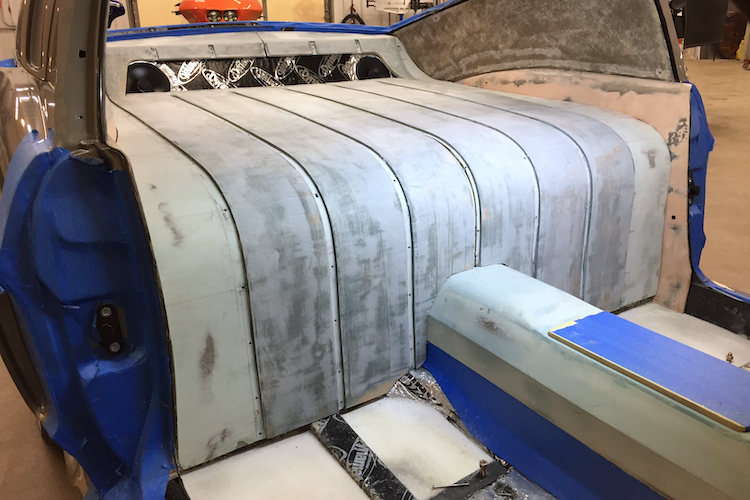 Nevertheless, something needed to be done to tidy up the rear half of the cabin. So the team went to work on covering the wells.

Using aluminum, composites and fiberglass they built a cascading structure with hidden storage compartments behind the front seats. The structure was built in two pieces so that it could be removed from the vehicle and upholstered in leather. 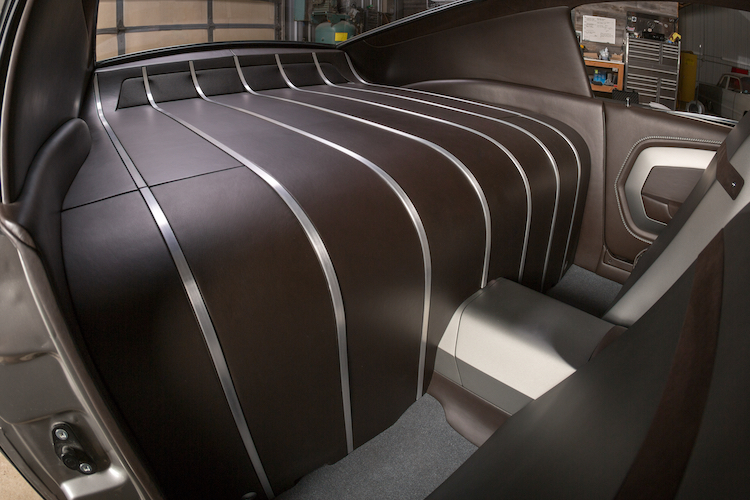 Seven hand-formed 1/2″ wide aluminum strips were inlayed into the fiberglass, adding a touch of class and just enough contrast to breakup the sea of brown leather in the rear half of the cabin.

The headliner presented some unique challenges to the team, as the owner requested additional headroom.

As such, Customs by Vos decided to forgo the original bow-style headliner and construct a one-piece liner instead. 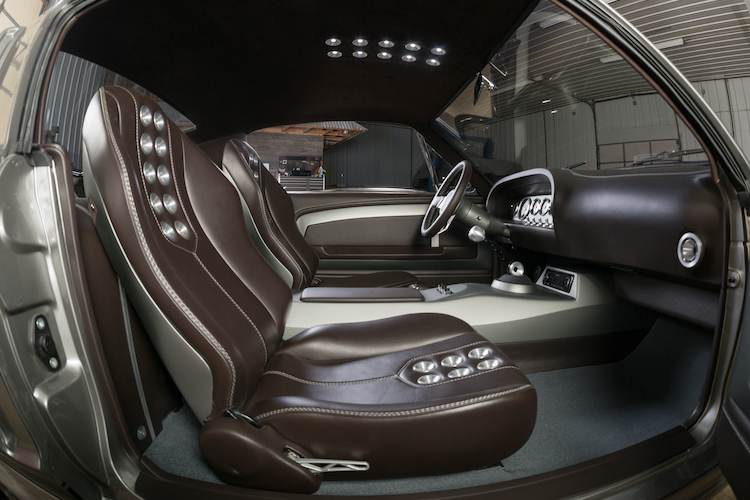 To do so, they created a fiberglass mold on the exterior roof of the Mustang, taking special care to protect its paint.

The raw fiberglass mold was then trimmed to fit in the cabin, covered in a layer of thin foam and upholstered in brown Alcantara. Aluminum brackets were used to keep it pressed against the car’s inside roof.

The door panels were also quite challenging to construct, said Dave.

“We really struggled with the door panels,” he said. “Not so much from the design, but from the lack of tolerances when the door closes to the car.” 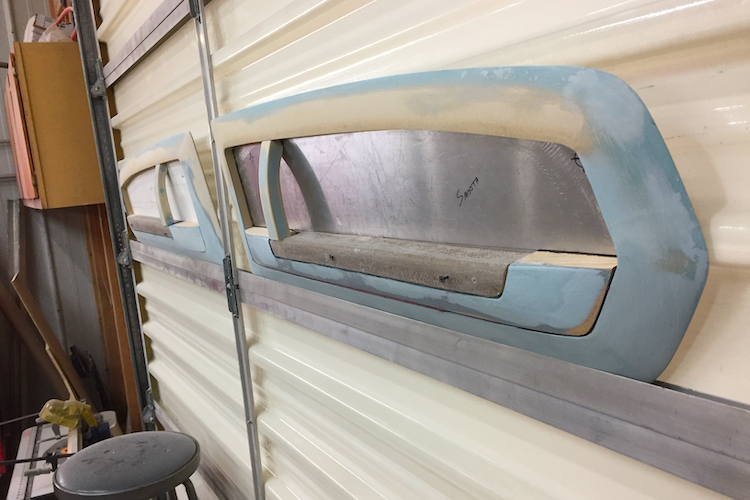 “The removable part of the door panels are inserts inside the now leather-wrapped inner door structures,” said Dave.

“To make the inserts, we started with a 1/16”” aluminum base and built up composite materials to give us the desired shape. The perimeter structure of the panel is painted to match the car and console, while the rest is wrapped in leather and suede.”

“Unlike most other door panels, there are no clips that hold these panels on. Instead, they hook and slide into place and then are secured by two hidden bolts under the suede-wrapped armrest cap, which is held in place by magnets.” 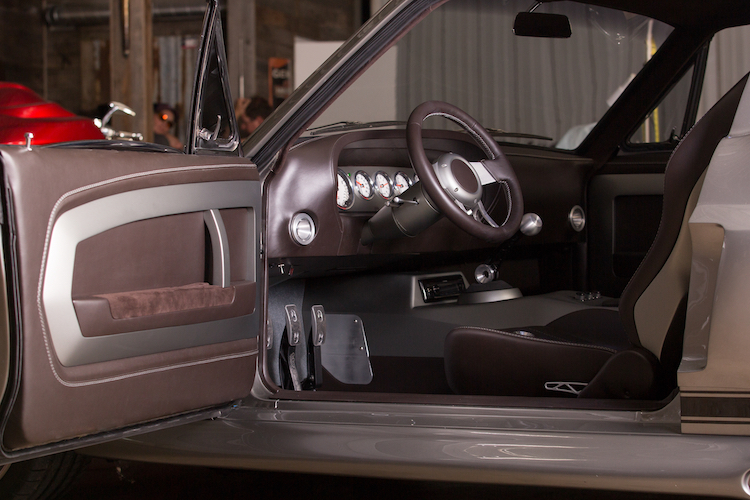 Dave said his favorite part of the door panels are its aluminum handles, which sit flush in the area wrapped in suede to match the armrests. “They blend so well that you wouldn’t even notice them if you didn’t know they were there,” he said.

To create the flat look of the carpet, Interiors by Vos covered the metal floorboard with Dynomat soundproofing and then several layers of closed-cell foam. The foam was then sanded to create an even surface.

The team covered the floor in a gray Daytona weave carpet to lighten the cockpit and contrast with the dark brown leather. Custom sill plates and kick panels were constructed from aluminum to finish the perimeters.

We’ve all heard the saying: “Jack of all trades, master of none.”

Dave Vos and his team have, in fact, mastered them all. They’re trimmers, fabricators, engineers, artists and so much more. How else could they create such high-caliber interiors?

“Altogether, when you add up the design process, fabrication, machine time, upholstery and fit and finish, we have around 1,100 hours invested in this interior build,” said Dave.

“All possible because of the amazing team we have at Customs by Vos!”

Did you know that in an effort to attract … END_OF_DOCUMENT_TOKEN_TO_BE_REPLACED

Installing convertible soft tops is one of … END_OF_DOCUMENT_TOKEN_TO_BE_REPLACED

Once strictly a product of the aftermarket, … END_OF_DOCUMENT_TOKEN_TO_BE_REPLACED

No this isn’t a wild aftermarket upgrade. In … END_OF_DOCUMENT_TOKEN_TO_BE_REPLACED