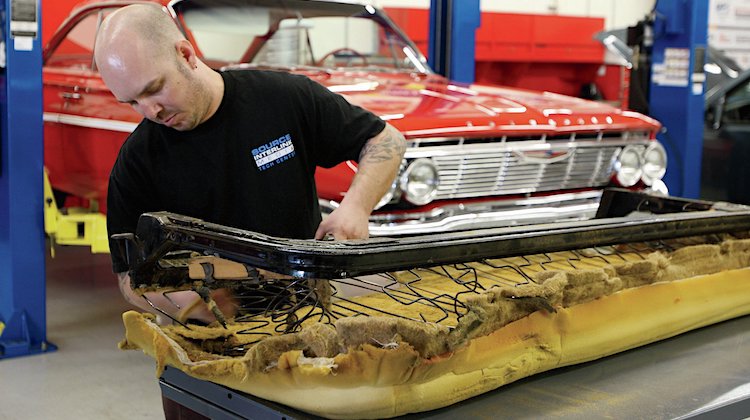 With how often trimmers work with foam rubber, it’s easy to take it for granted. But this old New York Times article reminds us that shops didn’t always have the luxury of working with the material.

“Although regarded as a highly important development for the rubber industry, latex foam rubber, introduced this week as a seat padding in two automobile lines, has as yet a comparatively small output, according to estimates in the trade yesterday.

No one would estimate what the possible production for the forthcoming year would be, but agreement was unanimous on a sharp increase. Five of the leading rubber companies in the country have been licensed to turn out this latex foam rubber and strong emphasis will be placed on research to extend the current markets for it.

Upholstery, bedding, auto sets and all types of padding, for which the product is now being used, are only the beginning of its possibilities, it was said. For instance, if it became standard equipment on all cars, production for this market alone would be about 90,000,000 pounds a year.”

Fast forward 80+ years and foam rubber is ubiquitous — and interestingly enough, on its way out. For years now, automakers have been experimenting with soy and other sustainable sources from which to create seat padding.

Have you ever wondered how automotive carpet … END_OF_DOCUMENT_TOKEN_TO_BE_REPLACED

Check out these ridiculous videos by YouTuber … END_OF_DOCUMENT_TOKEN_TO_BE_REPLACED

We interview a lot of master craftsmen, but … END_OF_DOCUMENT_TOKEN_TO_BE_REPLACED