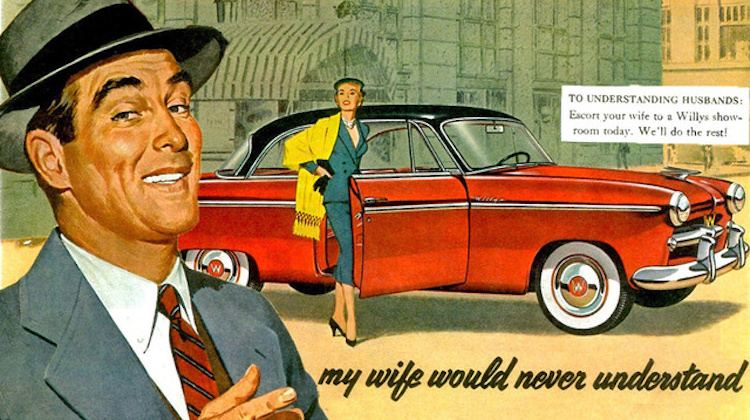 Until the 1960s, it was customary for men to buy cars, but have their wives chose the interior colors and fabrics. In fact, keeping up with the auto upholstery was considered part of a wife’s household duty.

It was sexist, for sure. But to add insult to injury, many men didn’t even trust their wives to choose wisely. In fact, some tried to influence their decisions and even had final say.

Case in point: On June 12, 1957, The New York Times published an article, in which a representative for Rayco Company mansplained seat covers to women.

Take a look for yourself…

Picture windows are bringing sunshine into the lives of manufacturers of auto-seat covers.

There is so much glass in the design of late-model automobiles that a car lot often bears a close resemblance to a housing development. This see-through trend means that more attention is being focused on the interiors of cars — making attractive seat covers almost as essential as brakes. 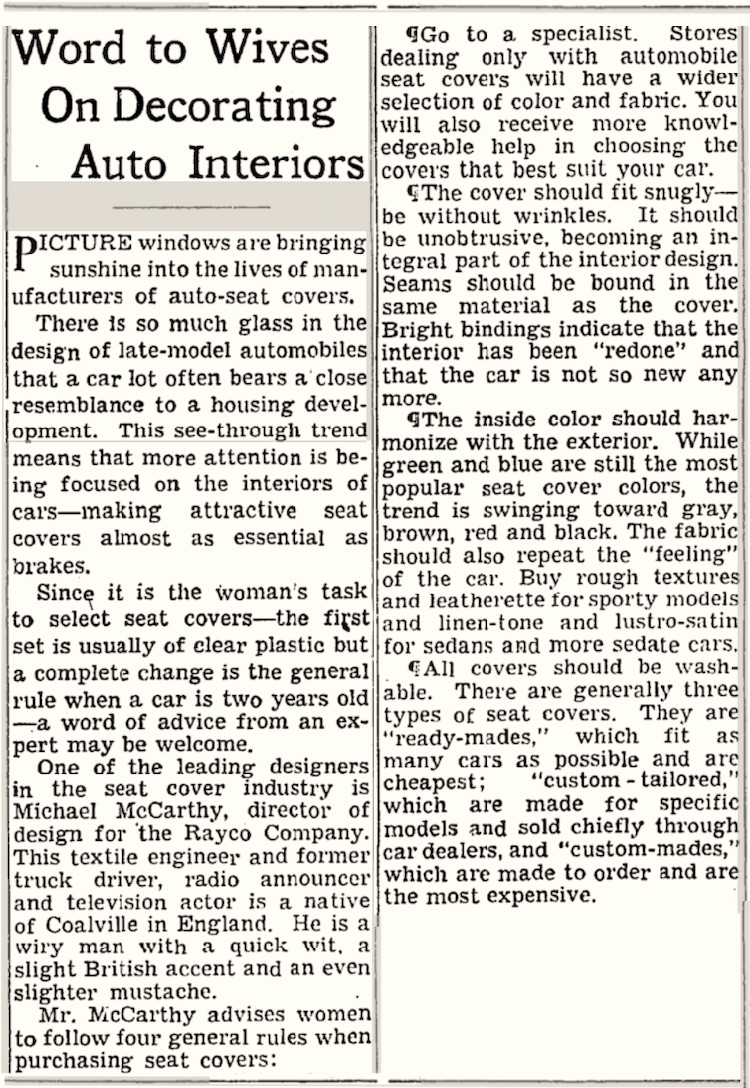 Since it is the woman’s task to select seat covers — the first set is usually of clear plastic but a complete change is the general rule when a car is two years old — a word of advice from an expert may be welcome.

One of the leading designers in the seat cover industry is Michael McCarthy, director of design for the Rayco Company. This textile engineer and former truck driver, radio announcer and television actor is a native of Coalville in England. He is a wiry man with a quick wit, a slight British accent and an even slighter mustache.

1. Go to a specialist. Stores dealing only with automobile seat covers will have a wider selection of color and fabric. You will also receive more knowledgeable help in choosing the covers that best suit your car.

2. The cover should fit snugly — be without wrinkles. It should be unobtrusive, becoming an integral part of the interior design. Seams should be bound in the same material as the cover. Bright bindings indicate that the interior has been “redone” and that the car is not so new anymore.

3. The inside color should harmonize with the exterior. While green and blue are still the most popular seat cover colors, the trend is swinging toward gray, brown, red and black. The fabric should also repeat the “feeling” of the car. By rough textures and leatherette for sporty models and linen-tone and lustro-satin that for sedans and more sedate cars.

4. All covers should be washable. There are generally three types of seat covers. They are “ready-mades,” which fit as many cars as possible and are cheapest; “custom-tailored,” which are made for specific models and sold chiefly through car dealers, and “custom mades,” which are made to order and are the most expensive.

Everyone that calls your auto upholstery shop … END_OF_DOCUMENT_TOKEN_TO_BE_REPLACED

To honor the first-generation Dodge … END_OF_DOCUMENT_TOKEN_TO_BE_REPLACED

When 17-year-old Derek Friesen was hired to … END_OF_DOCUMENT_TOKEN_TO_BE_REPLACED