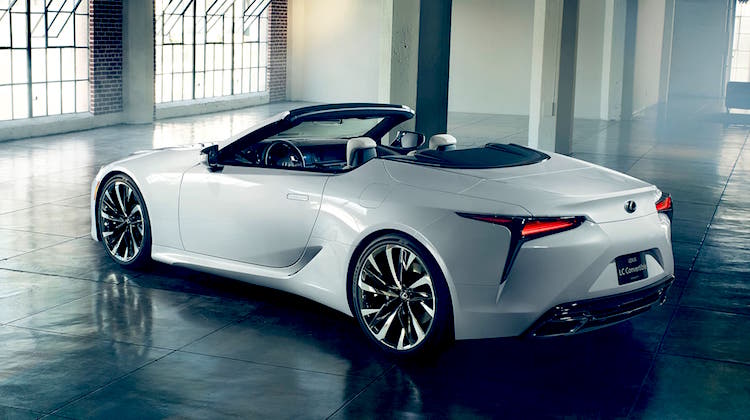 If you get as excited as we do when a new convertible model is announced, you’ll be happy to hear that the Lexus LC 500 will soon be a droptop.

The Japanese automaker debuted the latest addition to its LC lineup at this month’s Goodwood Festival of Speed in the UK.

Lexus didn’t provide details and covered the roadster in body-masking wrap. However, the automaker did unveil an LC Convertible concept at the 2019 North American International Auto Show. At the time, they said it would likely go into production.

Lexus hasn’t announced whether the new vehicle will feature a retractable hard top or folding soft top. However, most industry insiders say they fully expect the later.

“Long, low and lean, the LC Convertible concept retains the athletic proportions of the LC coupe,” Lexus said in January. “It’s a shape that evolved naturally from the original LC design, yet still manages to stand on its own with a unique identity. It blends uniquely Japanese aesthetics with the promise of sensory satisfaction that only a convertible can provide.”

We’ll let you know when Lexus releases details on the production vehicle. For now, brace yourselves for another hot droptop!

Few automakers that exist outside the realm … END_OF_DOCUMENT_TOKEN_TO_BE_REPLACED

Faurecia, one of the largest automotive … END_OF_DOCUMENT_TOKEN_TO_BE_REPLACED

Real men sew. We've always known that. But it … END_OF_DOCUMENT_TOKEN_TO_BE_REPLACED

Installing convertible soft tops is one of … END_OF_DOCUMENT_TOKEN_TO_BE_REPLACED