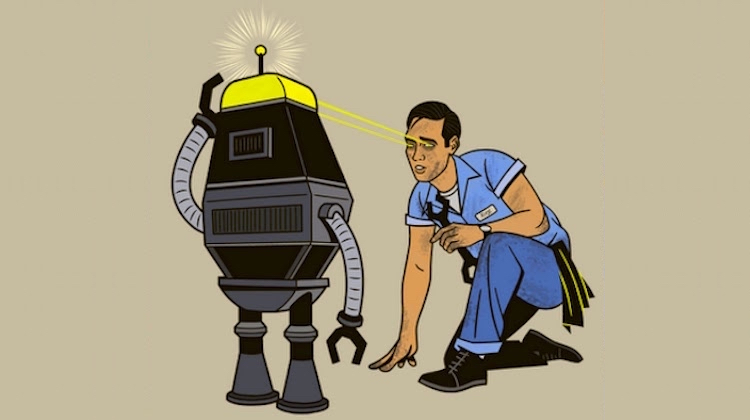 For decades, robots have been threatening the jobs (and livelihoods) of America’s workforce.

We see them everywhere – from automated telephone operators, to power car washes and even self-checkout counters. Until recently, however, most have only affected workers with limited skills. But as technology advances, more and more skilled laborers are finding themselves in similar positions. Auto Trimmers are no exception – especially now that the German company Moll Automatische Nahsysteme has invented the Robo-tailor.

Even if sewing isn’t your strong point, chances are you could outperform most machines. Fabric needs to be carefully aligned and held with the right amount of tension during stitching, a task best suited for two human hands. But now a one-armed robot, developed by a European project called Leapfrog, seems like it’s up to the challenge. […]

The arm, developed by German company Moll Automatische Nahsysteme, was initially designed to help doctors stitch up patients after surgery. Since then, it has also been used to sew car upholstery. It’s a much faster worker than humans: a job that would take an experienced human 5 minutes to complete is finished up by this robot in just 20 seconds.

The robot is just one element of an automated production line being developed by Leapfrog to create a jacket. A pattern is first cut out by a computer-controlled cutting table before suction grippers transfer the pieces to a bespoke, shape-changing dummy. Then pins hold the fabric in place for the arm to sew it up.

[Checkout a video of how Robo-tailor operates on New Scientist.]

Robo-tailor is still in development, but it’s easy to see how a machine like this can revolutionize the auto trim industry. With robots cutting patterns and sewing fabrics at lightening speed, a single machine operator can replace dozens of seasoned auto upholstery professionals (perhaps more). And, because the cost to produce a finished product will be greatly diminished, the price of upholstery is also likely to drop.

Of course, this won’t happen for quite some time. Just be aware, it’s coming…

Real men sew. We've always known that. But it … END_OF_DOCUMENT_TOKEN_TO_BE_REPLACED

Over the last couple of years, trimmers have … END_OF_DOCUMENT_TOKEN_TO_BE_REPLACED

We know that Bentley Motors creates some of … END_OF_DOCUMENT_TOKEN_TO_BE_REPLACED

Listen up Cheech. We’ve all seen your shop’s … END_OF_DOCUMENT_TOKEN_TO_BE_REPLACED