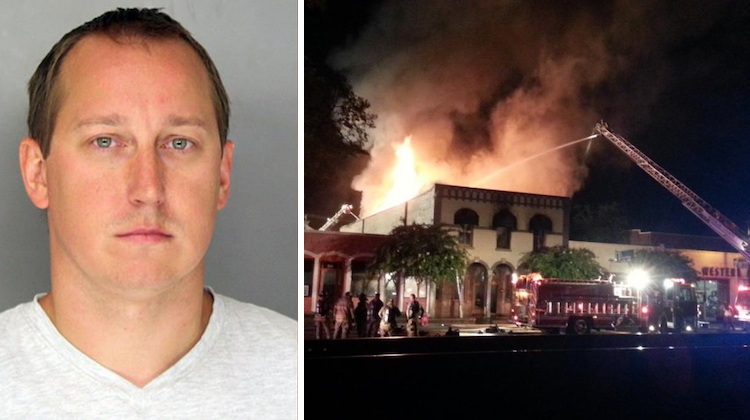 A Georgia court sentenced trimmer Christopher Hedgecock to 30 years in prison after he was found guilty of starting a fire at his auto upholstery shop.

Hedgecock, 35, was recently convicted of arson and insurance fraud for burning Town and Country Fabrics & Upholstery in Douglasville. He faced up to 70 years in prison for the crimes.

The 2014 fire injured a firefighter and damaged the city’s historic district. A hair shop and a tax preparation business also suffered smoke and water damage, said the Douglas County Sentinel. The Hog Ring reported on the fire in 2014.

Following a lengthy investigation and trial, the court found Hedgecock guilty of three counts of arson and one count of insurance fraud. Derek Rosa, an employee, also pleaded guilty to an arson charge.

“Mr. Hedgecock showed no remorse for his crime, nor any appreciation of the danger he placed the firefighters in,” said Brett Adams, the Assistant District Attorney who tried the case. “He is an unrepentant criminal, and Douglas County is safer with him in prison.”

In addition to the prison term, Hedgecock must pay $10,000 in restitution, according to the Insurance and Safety Fire Commissioner.

Although our "Meet the Trimmer" series … END_OF_DOCUMENT_TOKEN_TO_BE_REPLACED

Auto trimmers all over the world are … END_OF_DOCUMENT_TOKEN_TO_BE_REPLACED

The Tesla Model 3 is a pretty sweet car. But … END_OF_DOCUMENT_TOKEN_TO_BE_REPLACED

It’s no secret that there’s a lack of … END_OF_DOCUMENT_TOKEN_TO_BE_REPLACED