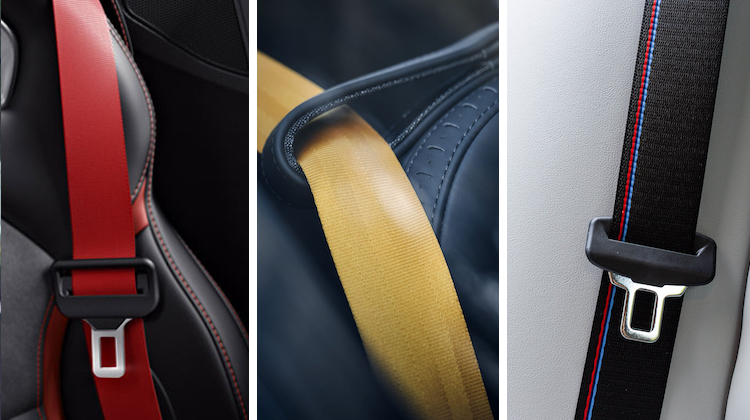 What do you think of cars that feature color seat belts? Cool or corny?

Kristen Lee, an automotive journalist with The Drive, recently published an article making the case for more color seat belts. And I have to admit, I agree with her reasoning. She wrote:

A seat belt is one of the first things you interact with when you get into a car. You get in, you close the door, and you fasten your seat belt. … Seat belts so often come in basic and boring black fabric that seeing one that isn’t that is like seeing a knob in the middle of a door. Hobbit-style.

Having a cool seat belt also feels like having a cool bit of the car that you can intimately enjoy for yourself. So much of a car’s other features—its exterior looks, its noise—are best enjoyed from the outside by other people. A colored seat belt offers exactly zero performance upgrades, but it’s also something that doesn’t shout for the attention of bystanders. You most likely don’t even notice the belt until you’re reaching for it to put it on, and likely each time you do it’ll be met with, “Oh hey, this is kinda neat!” It’s an easy modification for a very self-contained little nugget of emotional delight that has nearly zero downsides.

I say nearly because yes, the lighter-colored seat belts are probably easier to get smudgy. But I don’t imagine it’s something a little soap and water won’t take care of. And if you’re that worried about it, don’t go full-color seat belt. Do what BMW does in its new M3 where most of the belt is black but is stitched with M colors. This is also acceptable.

Cars come in all kinds of exterior paint shades that you can barely see when you’re sitting in them. It’s time we dressed up the seat belts as well.

But why stop with the seat belts? In an age of bland car interiors, the market is screaming for someone to bring back shades like green, red and blue. Let’s see it on the seats, the carpets, the door panels and more.

To read the full article, check out “Color Seatbelts Should be Standard on Every Car.”

To honor the first-generation Dodge … END_OF_DOCUMENT_TOKEN_TO_BE_REPLACED

This is the first in a new series of articles … END_OF_DOCUMENT_TOKEN_TO_BE_REPLACED

When 17-year-old Derek Friesen was hired to … END_OF_DOCUMENT_TOKEN_TO_BE_REPLACED