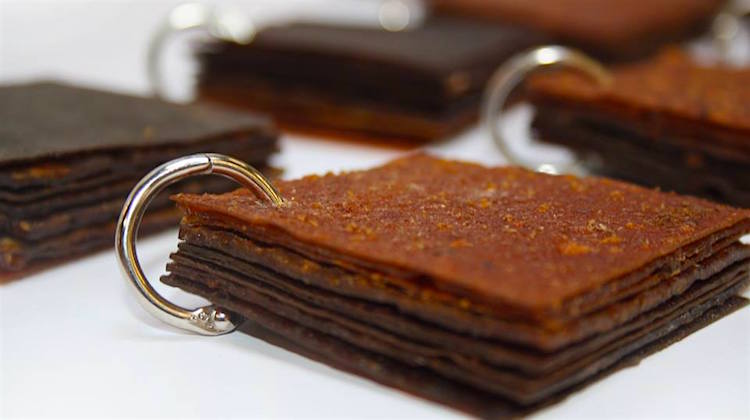 Well, now you can add fruit roll-ups to the mix, because student researchers in The Netherlands just developed a new fruit-based “leather.”

In an interview with Mashable, researcher Hugo de Boon explains how the fabric, called Fruitleather Rotterdam, is made:

After collecting food waste from the market stands, the team makes sure all seeds are taken out of the fruit before they cut it up and mash it. Then they remove all bacteria from the fruit by boiling it, to ensure that it won’t rot. The next step is spreading the paste onto a “specific surface,” which de Boon said is “crucial in the drying process.” Once it’s dried, the raw Fruitleather material is produced.

Interestingly, that’s exactly how my grandmother used to make fruit roll-ups. Though, I’m sure, Fruitleather Rotterdam is nowhere near as sticky (or tasty?).

According to the researchers, it’s also a lot more durable. They’re currently using it to make purses, and say it’s even strong enough to upholster cars. In fact, an unnamed automaker recently inquired about the new fabric.

The developers, however, aren’t just interested in selling the technology. Their main goal is to show the world a positive example of how food can be recycled. Their website reads:

What we want to achieve with this project is to create awareness for the problem that is food waste, and show that there is a solution. We want to work together with companies and organizations to make the material better and better, and create a wide variety of products. Increasing the quality of the technical abilities of the material as well as the wide range of product that can be created with fruitleather.

So will we one day be upholstering car interiors in mushed apple and mango paste? Only time will tell…

For now, learn more about Fruitleather Rotterdam by visiting Fruitleather-Rotterdam.com. You can also check out the video below (just make sure to turn on the English subtitles).

After 111 years in business, one of the … END_OF_DOCUMENT_TOKEN_TO_BE_REPLACED

Need to design and upholster a high-back … END_OF_DOCUMENT_TOKEN_TO_BE_REPLACED

The Tesla Model 3 is a pretty sweet car. But … END_OF_DOCUMENT_TOKEN_TO_BE_REPLACED

Once strictly a product of the aftermarket, … END_OF_DOCUMENT_TOKEN_TO_BE_REPLACED